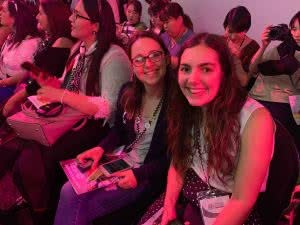 YWCA Canberra’s Vice President Ashleigh Streeter and Board member Sophie Fisher were among a contingent that attended the YWCA World Council. These are their reflections.

From 17 to 22 November 2019, we were fortunate enough to attend the 29th YWCA World Council in Johannesburg, South Africa. World Council is held every four years and brings together YWCAs from all over the world to discuss the direction and governance of our movement, to celebrate the progress of the previous four years and plan for our goal of 100 million young women and girls transforming power structures. In line with this goal, the theme of this year’s World Council meeting was Young Women Transforming Power Structures for Gender Equality.

As well as questions of governance, discussions ranged from the role of young women and allies in the movement, the place of Christianity in guiding our actions, the range of programs and projects run by Ys globally and ways that we can support one another in achieving our ultimate goal. 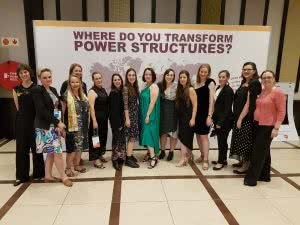 ringing everyone together provided an opportunity to see the diversity which exists within our movement. The global Y movement exists within different national contexts with programs ranging from sexual and reproductive health, women peace and security, climate change, leadership, trafficking and community cohesion. Similarly, the forum provided an opportunity to connect with young women from around the world, and to learn about new issues, and what we in Australia can be doing as allies to support causes such as peace and disarmament and climate change. We were pleased to share our Bringing On Board report as a tool to support the position of young women on boards in line with the World Y quota for 25 per cent of board directors to be young women. We are even more pleased that 60 per cent of the newly elected World Y board and Nominations Committee are young women, a great testament to the power and progress of the movement. 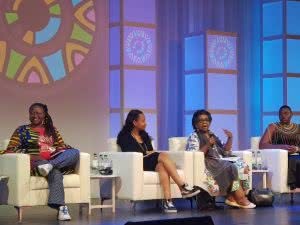 We were fortunate enough to hear from a number of presenters including young women who spoke about living courageously, and planning for the future. A particular highlight was the first report from the Young Women’s Global Advisory Council, a body established at the last World Council meeting in 2015 to provide counsel on the way forward to achieving our 2035 goal. Led by Lisa Gasciogne from YWCA Australia, the group presented an audit and overview of the movement’s engagement with young women, including a number of recommendations towards enhanced engagement with young women. The report can be accessed here. Further, delegates were invited to participate in an excursion to visit some key historical sites connected with the apartheid movement before attending a dinner to celebrate the work of some incredible Y women during the apartheid era. It was an absolute privilege to celebrate the work of these women and appreciate the importance of the Y movement in bringing women together to create historical social change. We were also lucky to learn from the wealth of experience, skills and expertise on the Australian delegation, and to cement strong relationships across the YWCA movement in Australia to carry us forward for the next four years.

Finally, World Council was a great opportunity to reflect on the work that we do here in Australia. We were proud to be able to share the incredible work of YWCA Canberra, empowering young women and girls through our training programs, Computer Clubhouse, Early Learning Centres, She Leads programs and board traineeships (to name just a few!). The YWCA movement has been in existence for 160 years, with YWCA Canberra being around for 90 of them. Already, we’ve made significant progress towards empowering young women and girls both across the ACT and nationally and we can’t wait to see what the next four years will bring.

You can read the previous article in this series here and the next article here.

YAction shines a light on the advocacy of YWCA Canberra, like-minded organisations and the issues that are important to our community.

This publication is about bringing the voices, initiatives and efforts of activists and organisations to the fore – we hope that by doing this we will increase awareness of critical issues and present opportunities for collaboration that our members, friends and supporters can get involved in. Ultimately, we hope to strengthen a movement that works together to achieve gender equality in the ACT, as we believe that this will take a society-wide effort.